Why the tyrannical hates public schooling


Posted by John Tanner at 10:29 AM No comments: Links to this post

Texas Aspires distributed the comments below and to the right this week. They are fraught with error and misunderstanding and therefore worthy of being dismissed, but what the heck.
FIRST, any fear mongering by educators is around a system that research has shown is in fact harmful to students and schools and fails to meet any of the actual policy goals. 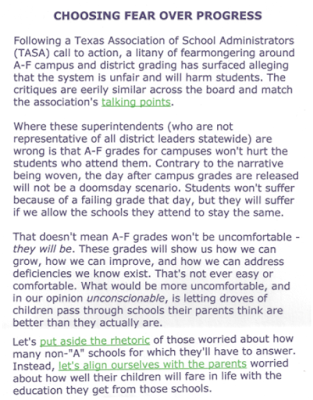 SECOND, eerie is a word for something that inspires inexplicable fear or dread. What is in fact eerie is that every A-F implementation has been done absent evidence that A-F actually works: the fact that it appears on the surface to be rational does not automatically render it so. What should be eerie is the lack of critical thinking in major educational policy decisions, and among those who blindly support such things, absent at the minimum a cursory investigation.
THIRD, regarding the point that: “A-F grades for campuses won’t hurt the students who attend them,” I reference, as just one of many sources, the excellent research done by the University of Oklahoma and Oklahoma State and published in a series of peer reviewed journals that shows just the opposite. Their conclusion: school grades fail to perform the policy function assigned to them, and acting as if they do generates inefficiency and confusion. That hurts students.
FOURTH, students will suffer. School grading is based largely on standardized tests scores and other indicators (e.g., attendance, graduation rates) that among all available indicators are some of the most heavily influenced by non-schooling effects. They were selected, however, because they can be easily computed and aggregated, while indicators more heavily influenced by actual schooling tend to be messy and not very prone to aggregation. The end result is this: because socioeconomic status frequently dictates the amount and quality of numeracy and literacy experiences and practices lifetime to date (which are then reflected in test scores), as well as the understandings around what a good education affords, poor students tend to have less of what matters in schooling than rich students. What is then identified in test scores and other indicators are pattern schools should be disrupting. Instead, the choice is often made to negatively judge those trying to help as well as those being helped. Judgments assigned to non-schooling effects risk telling schools in poor neighborhoods that they are failing their students, and schools in rich neighborhoods that they are doing just swell, absent the information required to actually make such judgments. Erroneous judgments, we would be wise to remember, pose the greatest risk for the most vulnerable students.
FIFTH, I quote from the Oklahoma research to counter that grades “will show us how we can grow…improve, and…address deficiencies.” Here is the quote: “Letter grades promised to provide a clear and easy way to understand and measure school performance. However, when tested with individual student achievement data, we found that school letter grades do no such thing.”[1] To repeat, with feeling: NO SUCH THING.
SIXTH, what is actually unconscionable is letting droves of students work their way through schools being judged via tools designed for a range of purposes that do not include judging schools. Contrary to popular belief (and available to anyone willing to look) are the facts: test scores were never designed to be an indicator of quality, and combining unlike things in an attempt at clarity loses all of the original meaning. A pilot cannot fly a plane on which all of the gauges were combined into one; education is no different. When one or more gauges doesn’t mean what people think, so much the worse.
SEVENTH, A-F fails to “align…with the parents worried about how well their children will fare in life.” Parents deserve great schools for their children, but A-F has been proven not to be able to indicate the degree or lack of actual greatness. Reliance on a bad indicator is a way to ensure that any lack of greatness persists through inefficiency, and to reward or punish what should not be rewarded or punished.


Posted by John Tanner at 12:59 PM No comments: Links to this post