If one Googles "rigor" and selects the image option the result offers clear evidence that the term has a huge variety of meanings in education--many of which are incommensurate with each other--strengthening my argument that its use as an educational term is more about the creation of a community around a set of terms than in serving as a useful adjudicator for what should comprise a quality of education. Consider the following:

1. The dictionary definition clearly has not yet caught up with the current use of the term as "the adjudicator for everything that is to be valued in a quality education." The definition below is from a recent unabridged dictionary and even dictionaries on the internet have not yet posted anything resembling the new meanings. Perhaps that is because nothing approaching actual agreement exists in the term's current usage. It is more likely the severity of the semantic offense in that these new possible meanings are so far removed from the old denotative meanings that they are unrecognizable as having anything to do with the historical term. 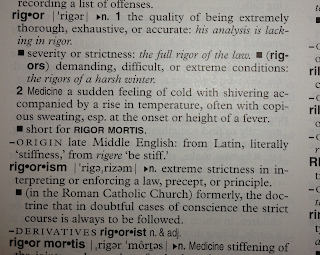 2. See below for evidence of the claim in #1 that its all about rigor. 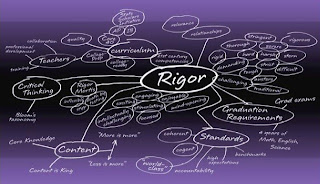 3. The quote below suggests that the "rigor" in the term "rigor" and the "rigor" in the Latin "rigor mortis" are not the same thing, even though every dictionary I have so far found says that they are. Its a folksy sentiment but that doesn't make it accurate. 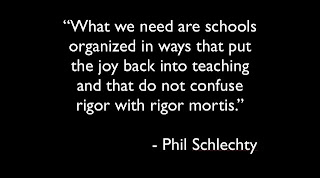 4. There is a head banger band called Rigor Mortis (at least they look like head bangers), and now, apparently, a clown. 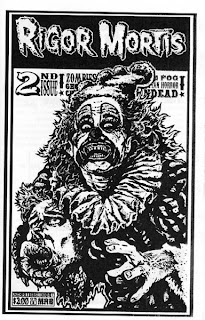 5. I've seen this Venn diagram many times and find it hard to reconcile which of the new meanings of rigor are being referenced here, and not surprisingly none of those contained in the dictionary seems to fit either. Not even "a sudden feeling of cold with shivering accompanied by a rise in temperature, often with copious sweating." 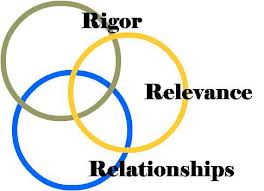 6. Rigor, of course, must be applied in an equitable fashion. These students all seem to be smiling a lot considering that the education they are advocating for will be one that is severe, strict, and unyielding in its harshness.

7. I find it remarkable in the next image how the terms "flexible" and "rigor" are used in the same sentence, given that they are listed in nearly every thesaurus I can find as antonyms. 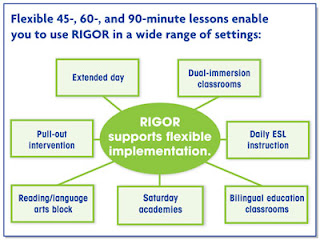 In attempting a bit of humor here my point is this: I am often accused of splitting hairs on this topic, but I assure you that every image above (except the clown) was created by someone that had something meaningful to say and their message now fails because of imprecise language. They chose a popular term with a meaning far removed from whatever message they were actually trying to send, and now the actual meaning is lost, or at best confused.

That is what I object to: educating 55,000,000 children each year is tough enough without putting a confusing set of vocabulary in the way. It makes us look like we don't actually know what we're talking about, or we're trying to hide something through language that obfuscates. Neither is good.
Posted by John Tanner at 3:00 PM