Some working definitions regarding accountability


Definition of Accountability
Organizations consist of people, processes, and systems. Each organization exists to produce a benefit, value, or usefulness to those outside the organization. This can be a product for customers, profitability to shareholders, or a service.

Accountability connects the degree to which the benefit, value, or usefulness did or did not occur to the people, processes, and systems. An accountability system ultimately assigns cause and responsibility to people.

Definition of Accountability System
An Accountability System is a change engine. It looks objectively at the degree to which the benefit, value, or usefulness is accomplished and generates findings that must be acted upon. An accountability system is not a reporting system per se, but much more. Reporting systems elevated to accountability systems risk judgments of success or failure that have nothing to do with the benefit, value, or usefulness it is an organization’s job to provide.
Posted by John Tanner at 6:35 AM No comments: Links to this post

A good friend sent this knowing I'd be interested. I was. My response is below.

Hi George—
Thanks for sharing. Tons of connections.

I’m long been suspicious of educational “standards,” those laundry lists of content states put out, and what that implies about education: education is about learning “stuff.” However, that “stuff” is based on what elites can most easily learn, providing them a distinct advantage over non-elites. As long as “stuff” remains at the core of what is to be taught, I fear that will have the effect of furthering what the author talks about. And once again, a gesture that elites can claim to be about equity is anything but.

I started expressing this set of thoughts about six months ago using the graphic below (I don’t think I’ve shown this to you): 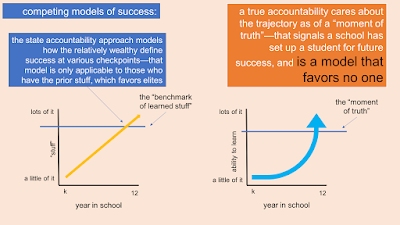 When success occurs among non-elites from very poor backgrounds it seems not to occur because they somehow matched the amount of stuff learned by elites, but because they left school on the right trajectory and caught up on the “stuff” later. As long as all our systems continue to focus on “stuff,” I fear that the outcomes signaled in the article will remain. “Stuff” is a convenient model, but a wrong one for the vast majority of kids, so it seems to me.

I also fear that the focus on content growth reinforces this notion that education is about “stuff.” What I really dislike about “growth” is that no system in the world exists that can catch a high school student up in terms of content who is four or five years behind, but I can easily envision a system that can move the trajectory of learning to a point that sets even that student up for future success. The more we focus on content for that student, the less likely we are to give them what they need, preserving the status quo while pretending to do otherwise. When a student heads to college on the right trajectory and lacks the “stuff,” the role of college is not to “remediate,” but to “catch up.” A student on the right trajectory is one ready to accelerate and can pick up a great deal in a very short period of time. A college that thinks that way would put some of its best professors in charge of the catch-up process, which is a far cry from from today’s remedial math and writing courses.

The trajectory argument is picking up steam in the community-focused accountability conversations, which I think is very interesting. What appears to be happening is that poorer communities are deeply disturbed by a system based on models designed with someone other than them in mind. Their exists a clear understanding that poorer communities are equal to wealthier communities in terms of both smarts and potential. What is needed is a system based on that fact, rather than one modeled on what relatively wealthy neighborhoods look like.

Best—
John
Posted by John Tanner at 7:40 AM No comments: Links to this post